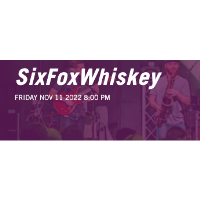 A tangible excitement grows, the crowd eagerly awaits for the lights to change, and the house music to fade. They’ve all gathered for the same reason - they came to see SixFoxWhiskey, and to experience something new. No two shows are the same, but the energy and musicianship are constant.

SixFoxWhiskey’s sound is different. They aren’t a jam band, they aren’t a rock band, a jazz band, a funk band, or a fusion band; but, they exist somewhere in the ethos of these genres. Reminiscent of Steely Dan, Vulfpeck, Umphrey’s McGee, and the Doobie Brothers, the band weaves through various themes, while demonstrating mindful and intentional songwriting. Ultimately, it’s this intent that their fans find interesting, and it’s their uniqueness that’s allowed them to grow significantly over the last 6 years.

In 2021, SixFoxWhiskey was awarded “Best in State” in the New England Music Awards - a recognition that validated the band’s growth, and cemented SixFox as one of the best acts in New England. Prior to the award the band held featured spots at major festivals including Levitate Music and Arts Festival, Rhode Island Music & Arts, StrangeCreek, and has sold out venues across New England like Brighton Music Hall, The Portland Press Room, Soundcheck Studios.

To date they’ve recorded three albums, four singles, which have received national attention on various radios, with their most recent album, “Natught Air” placing on the Relix Jam Band chart. The band has released two singles in 2022, and has plans to release more original work, while continuing to tour across New England and beyond.

Click here to learn about our Health & Safety policies and measures.

Masks are strongly encouraged but not required during your visit to 3S Artspace.

By purchasing a ticket and/or visiting 3S, you are agreeing to follow 3S Artspace’s health & safety requirements as they are on the date of your visit (not at the time of purchase). There may be exceptions or changes to our requirements for upcoming events, based on factors such as artist requirements and public health mandates.